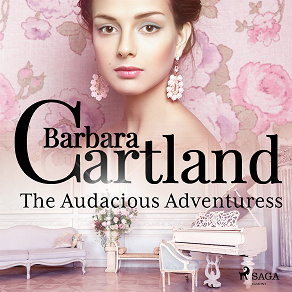 by Barbara Cartland
Unfairly dismissed from her role as a governess after her lecherous employer forces himself upon her, Druscilla Morley is determined to keep her head down. Dressing drably to hide her beauty, she is surprised to find an old acquaintance staying with her new family. Valdo, Lord Marquis of Lynche, is handsome, charming and an absolute rogue. It soon becomes clear that he is having an affair with the lady of the house and proposes a marriage of convenience to Druscilla to cover his tracks.

From miserable governess to Marchioness of Lynche, Druscilla can hardly believe her luck but are her feelings for the Lord Marquis as uncomplicated as it seems?

An early contender in the fake dating genre, 'The Audacious Adventuress' is perfect for fans of Julia Quinn, Eloisa James and Merry Farmer.


In her lifetime, British author Barbara Cartland wrote over 700 novels and was most famous for her contemporary and historical romances.
A prominent figure in London society, the young Cartland began her writing career as a gossip columnist for the Daily Express. It was partying in 1920's London that gave her inspiration for her first book, 'Jigsaw', a racy society thriller.
After marrying into the McCorquodale family, she began writing romance and holds a Guinness World Record for the most number of books published in one year: 191. Her books have been translated into many different languages, as well as adapted for stage and screen. She is beloved the world over and even counts the young Princess Diana as one of her many fans.
Listen to sample
Log in to borrow