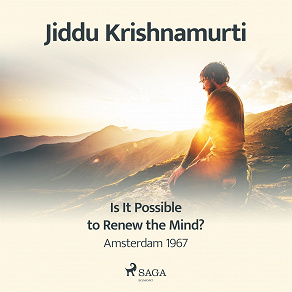 Is It Possible to Renew the Mind? – Amsterdam 1967

• When the mind is living through imagination and thought, it is incapable of living in the complete fullness of the present.
• Thought has created time, not chronological time but psychological time. That is, 'I will be', 'I should be'.
• Is it possible for the brain to be quiet, to give an interval between the old and the new? This interval is the timeless nature in which thought cannot possibly enter.
• That which has continuity is repetitive, which is time. It’s only when time comes to an end that there is something new taking place.
• To die every day to every problem, every pleasure, and not carry over any problem at all; so the mind remains tremendously attentive, active, clear.
• Since love is not desire or pleasure, how does one come upon it?
• Q: Is the feeling of responsibility a part of the order and discipline you were talking about?
• Q: Why don’t people get angry with what you are saying?