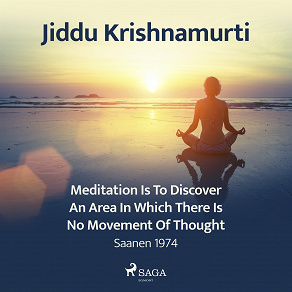 by Jiddu Krishnamurti
Listen to talks from J. Krishnamurti's Saanen gathering in Switzerland, 1974.

This talk: Meditation Is to Discover an Area in Which There Is No Movement of Thought – 28 July 1974.

• Has the world and its thought-based activity bred fear?
• Can hidden fears and subtle forms of pleasure be exposed through analysis?
• What is a mind to do when it sees the falseness of analysis and introspective examination?
• Is the controller different in nature from what he says he is going to control?
• Can the mind empty itself of time, direction and movement, which is the ending of thought?
• What place has knowledge in meditation?
• Can thought and meditation live together harmoniously in daily action?
• Is the speaker teaching you higher knowledge? All the speaker is saying is: watch yourself.
Questions from the audience followed the talk.