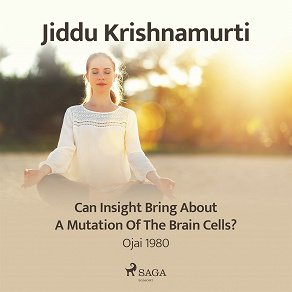 Can Insight Bring About a Mutation of the Brain Cells? – Ojai 1980

by Jiddu Krishnamurti
Listen to talks from J. Krishnamurti's Ojai gathering in California, 1980.

This talk: Can Insight Bring About a Mutation of the Brain Cells? – 11 October 1980.

• Thought and the brain.
• Can the brain free itself from all self-delusion?
• Why has the self become important?
• Can there be only sensation, thought, and no desire?
• Can desire – which brings illusion, self-deception and all the complications of changing desires – can the root of desire be dissipated?
• What prevents one from having a real insight? That is, seeing the truth of desire and therefore end it. Is it that we have never asked this question?
• When there is no desire whatsoever then there is a total revolution, and that will affect the consciousness of man.
• Is there a movement, an action that keeps the brain pure, uncontaminated?