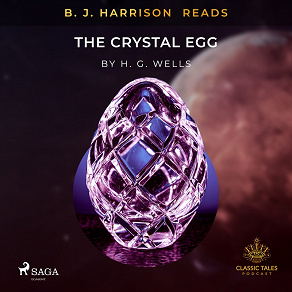 by H. G. Wells
Mr. Cave is an antique shop owner with some curious items in his collection. One of these if an extraordinary crystal egg, which he comes across one evening. Indeed, the egg seems to be a gateway to the planet Mars. This science fiction short story by H. G. Wells dating back to the late 19th century has inspired numerous other literary pieces, as well as radio and television adaptations. 'The Crystal Egg' is considered to be a precursor to H. G. Wells' famous science fiction novel 'The War of the Worlds' from 1898.

Herbert George Wells (1866-1946), aka H. G. Wells, was an English writer and social critic. Wells wrote in a variety of genres and styles, most famously science fiction. Once called 'the Shakespeare of science fiction', his works are full time travel, mad scientists and alternate universes. Wells' short stories and novels have appeared on the screen countless times as film and television adaptations. One of these is 'War of the Worlds' (2005) starring Tom Cruise, a film version of Wells’ novel The War of the Worlds.