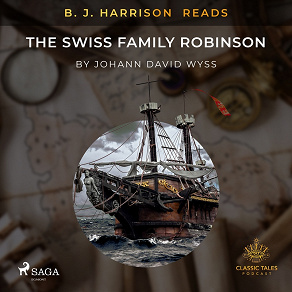 by Johann Wyss
William and Elizabeth are aboard a ship, together with their four sons, when a storm breaks out. William prays for their salvation, but this does not seem to be enough and the ship gets wrecked. The six-member family survive by finding their way to an isolated tropical island, but now they are alone and abandoned and can only survive if they stick together. They build a camp, but one of the sons is sent off to find a more permanent shelter. During his expedition, he meets a young girl named Jenny Montrose.

What was the family doing on the ship? Where were they heading to? Will they find a permanent shelter? Who is Jenny and what is she doing on the island? Is she to be the family’s salvation?

Find all the answers in Johann Wyss’ book "The Swiss Family Robinson" from 1812.

Johann David Wyss (1743 - 1818) was a Swiss author. He was inspired by Daniel Defoe’s notorious character of Robinson Crusoe, whose adventures were of great interest to Wyss’ four sons. His most popular book is "The Swiss Family Robinson", with which he wanted to teach his children an important lesson. The book was later edited by his son Johann Rudolf Wyss, who also wrote the Swiss national anthem.