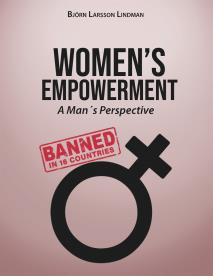 by Björn Larsson Lindman
suboMale leadership, patriarchal values and a few powerful men's ceaseless struggle for money and domination have subjected the Earth to environmental catastrophe and sparked a frightening nuclear arms race. Since the time of the suffragettes, women's influence on politics and economy is steadily growing. Not only in western democracies do women hold positions previously earmarked for men - but worldwide - the level of well-educated women is currently increasing at a notable rate. However, with this positive trend in mind, how much has fundamentally changed? One must question - have women wholly managed to really increase their political and economical influence? Furthermore is it enough to make a substantial difference? Progress is made, but the overall investment in male projects as armaments and the environmental degradation is steadily rising. In many cultures, women remain subordinate to their men, brothers and even their sons. Unprotected by law, locked up or kept as slaves, women still constitute cheap labor in households, industrial production, and the sex trade. Mindful people understand that the World is in dire need of an alternative to today's destructive male leadership. History shows that men in power will not in sufficient time be able to change their behavior to stop the emerging catastrophe. Could a radical increase in Female political power save the situation?
Log in to borrow