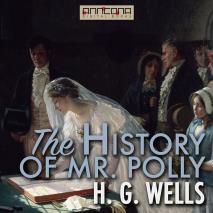 The History of Mr. Polly

A funny and touching account of the imaginative Mr. Polly who, bored and trapped in his conventional life, makes a U-turn –- and changes everything.

The protagonist of The History of Mr. Polly is an antihero inspired by H. G. Wells' early experiences in the drapery trade: Alfred Polly, born circa 1870, a timid and directionless young man living in Edwardian England, who despite his own bumbling achieves contented serenity with little help from those around him.

Mr. Polly's most striking characteristic is his "innate sense of epithet", which leads him to coin hilarious expressions like "the Shoveacious Cult" for "sunny young men of an abounding and elbowing energy" and "dejected angelosity" for the ornaments of Canterbury Cathedral.

H. G. Wells’ early life as the son of a semi-insolvent shopkeeper and as a draper’s apprentice fuelled his novels of the lower middle class: The Wheels of Chance (1896), Kipps (1905), and The History of Mr. Polly (1910). These works evoke the desperation of apprentices, clerks, and small traders in their monotonous toil behind shop counters. And, like Mr. Polly, his protagonists make a break from their mundane lives with more or less success.

The History of Mr. Polly received mostly enthusiastic reviews. The novel has been called "a complete comic miracle" and a "wonderful incarnation of what might have happened to Wells without education, a Wells driven to use the words bubbling in him and getting them all so delightfully muddled."

Herbert George "H. G." Wells (1866-1946) was an English writer, now best known for his work in the science fiction genre. He was also a prolific writer in many other genres, including contemporary novels, history, politics and social commentary, even writing textbooks and rules for war games.

Wells is one person sometimes called "The Father of Science Fiction", as are Jules Verne and Hugo Gernsback. His most notable science fiction works include The War of the Worlds, The Time Machine, The Invisible Man and The Island of Doctor Moreau.