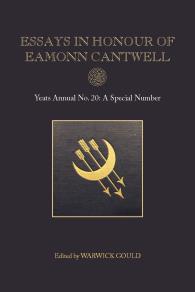 Essays in Honour of Eamonn Cantwell: Yeats Annual No. 20

by
This number of Yeats Annual collects the essays resulting from the University College Cork/ESB International Annual W. B. Yeats Lectures Series (2003-2008) by Roy Foster, Warwick Gould, John Kelly, Paul Muldoon, Bernard O’Donoghue and Helen Vendler. Those that were available in pamphlet form are now collectors’ items, but here is the complete series.
These revised essays cover such themes as Yeats and the Refrain, Yeats as a Love Poet, Yeats, Ireland and Europe, the puzzles he created and solved with his art of poetic sequences, and his long and crucial interaction with the emerging T. S. Eliot. The series was inaugurated by a study of Yeats and his Books, which marked the gift to the Boole Library, Cork, of Dr Eamonn Cantwell’s collection of rare editions of books by Yeats (here catalogued by Crónán Ó Doibhlin). Many of the volume’s fifty-six plates offer images of artists’ designs and resulting first editions.
This bibliographical theme is continued with Colin Smythe’s census of surviving copies of Yeats’s earliest separate publication, Mosada (1886) and a resultant piece by Warwick Gould on that dramatic poem’s source in the legend of the Phantom Ship. John Kelly reveals Yeats’s ghost-writing for Sarah Allgood; Geert Lernout discovers the source for Yeats’s ‘Tulka’, Günther Schmigalle unearths his surprising connexions with American communist colonists in Virginia, while Deirdre Toomey edits some new letters to the French anarchist, Auguste Hamon—all providing new annotation for standard editions. The volume is rounded with review essays by Colin McDowell (on A Vision, and Yeats, Hone and Berkeley), shorter reviews of current studies by Michael Edwards, Jad Adams and Deirdre Toomey, and obituaries of Jon Stallworthy (Nicolas Barker) and Katharine Worth (Richard Cave).